Boundaries and the Dignity of Risk 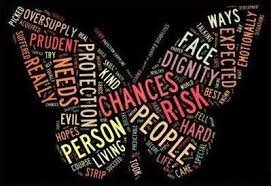 Boundaries are hard.  I’ve spent a life time working on healthy boundaries and I still fail at times.  Failure is just no fun.

Boundaries are even harder when we are in a position of letting our own child fall and reap the results of their choices.

Ugh.  I raised 3 sons and oh how difficult it was at times.  Each had their own set of struggles and each approached life and learning in a different way.  I had one son in particular that the only way he seemed to learn was through his mistakes, his errors, his sin, his school of hard knocks.

That really puts a parent in a difficult position.  Who really wants to stand back and let failure be the teacher of their child?

But as our children grow into adulthood, that is what we are called to do.  Proverbs 22:6 tells us to train up our children in the way they should go, because when they are old, they will not depart from it.  Hum, some seem to depart from it!  Without getting into a theological debate, there seems to be room for a child to turn the wrong direction.  In fact, we all have the opportunity to turn the wrong direction.  It’s called sin.

Throw in a disability or a mental illness, or ADHD, depression, or a difficult personality, and the training becomes very difficult.  At what point do you stand back and let consequences be their teacher?  I don’t know that anyone can truly answer that question for another person.

But here is what I know, God tells us that we can turn to him for wisdom, He will give it to us (James 1:5).  So I can’t tell you how to or at what point to let consequences be your child’s teacher, but I know that each of us are responsible for our own choices and our own consequences.  In a nutshell, we are each responsible for the life we choose.

None of my 3 sons were easy to raise, and the one that I thought was easy, just hid things better! (or so his wife tells me) Whew and I survived praise Jesus.

Then he became an adult.  He went to college.  He signed up for classes and sometimes dropped them.  He didn’t bother to drop them officially, just not show up.  I was committed to helping him through college until I saw this pattern of irresponsibility.

In his first years, he didn’t want to work; because this was supposed to be ‘the time of his life’ (he really said that to me).  So what is a parent to do?  In his 3rd year of college, I let him go, told him he was responsible for his own education financially.  He reamed me, how could I do this to him?  I was ruining his life.  But I knew that I couldn’t keep enabling him.  He had to figure things out as an adult.

That was one of the most difficult decisions of my life.  At that point, my husband had passed away and I was on my own with my difficult child who was now an adult! (I love him to death and he has turned into a wonderful man, now at age 30).

Well he found a way to pay for his college and continued for 6 years! He didn’t know what else to do with himself, so he just kept going to college.

At age 26, he still was in college, and you know what happens at age 26?  He was no longer able to be on my medical insurance, and he had not gotten a job or had any plans for his own insurance.  Prior to being dropped from my insurance, he was on medications for ADHD and depression.

He ended up at home.  I scrambled to keep him from sinking further into depression by begging my primary doctor to see him and refer him to a psychiatrist.  He was no longer in his college town and needed to see someone here.  Praise God, he did it.  He went to his appointments and got himself back on medications.

Then the bills started coming in.  He was living at home, so I was able to see hordes of bills, collections companies, etc.  It was a nightmare.  But what was amazing to me is that my son, finally, let me step into his life.  He started bringing each one to me, one at a time.  I would look at his predicament and explain was he was facing and give potential solutions.  The bills kept piling up, it really was a nightmare.  He had decided months back that because he didn’t know what to do with all the calls and the bills, he would simply ignore them.  His credit plummeted. He was scared, I was scared for him.

So how does a parent enter that situation without enabling an adult son?  I did a lot of praying.  God gave me wisdom and direction.  In the end I left my son with everything laid out, everything set up online for him to view, and I did pay a few things, but only enough to keep him from being destroyed.  I felt a peace about it as I prayed.  I felt like God wanted me to help him just enough to put his feet on the ground, so I did.  Oh, and did I mention the private loans for college?  How in the world can colleges let these barely adult people make such devastating decisions?

He lived with me for 6 months at age 26.  I was scared to death to let him move home.  He was scared to death about life.  That time together was a bonding time and, in the end, we came out with a stronger relationship than we had prior to that time.  I was able to give just enough grace to keep him afloat in life.  He finally saw the glaring consequences of his choices and was ready and willing to face them.  The day he moved out, he said to me, “Mom, if I knew I was going to move home and be at home for 6 months, I would have freaked out!”  I said to him, “I would have freaked out too!”  But then we both acknowledged that those 6 months were a special slice of life that had been given to us.  It was a time of restoration and a time of growth.

To this day, my son watches his online accounts like a hawk.  His credit score is back up to a place where he is looking for a house (or was until Covid hit).

Could someone have told me what to do in that situation?  Probably not.  Did God give me wisdom? Yes, I can’t credit anyone else.  God stepped into our mess and helped us get through it. He gave wisdom.

What does my story say about boundaries and the dignity of risk?  Boundaries are very hard to find and they need God’s wisdom as a parent.  Each child needs a different set of guidance and only the wisdom of God can direct you.  What about dignity of risk?  I believe that sometimes and often most times, we learn our best lessons through our worst mistakes.  As parents, we need to allow our children the dignity of risk, let them make their choices, experience their mistakes, and learn from them.

I think the question comes back to:  Are you willing to allow your child the dignity of risk?  Are you willing to let them learn some hard lessons from their choices?  And are you on your knees asking for God’s guidance, the God who created your child and knows him/her more than you do?  Are you asking for God’s wisdom as you navigate this murky water?  He says that if we but ask, he will give, and generously.